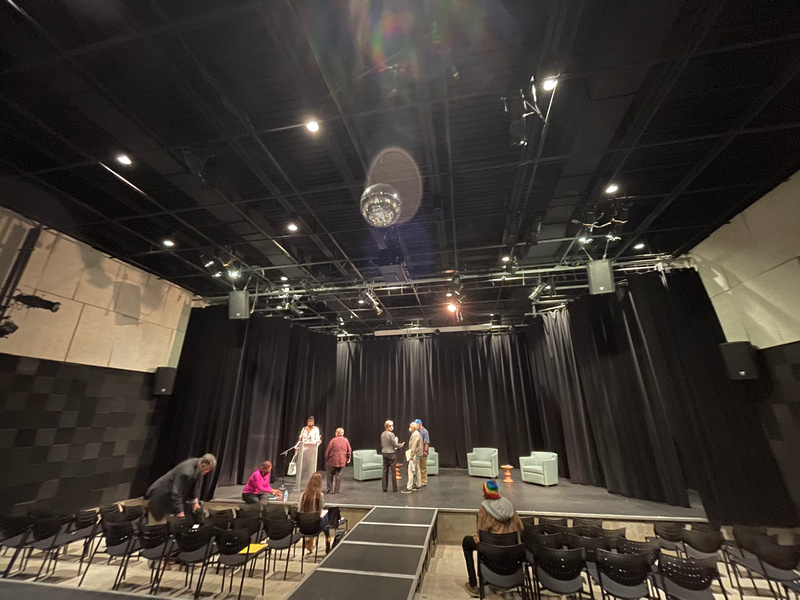 LGBTQ+ advocates reflected on former Chicago Mayor Harold Washington's legacy at Center on Halsted Oct. 13, discussing his role in the city's Human Rights Ordinance and outreach to the LGBTQ+ community. A display of 1980s Windy City Times covers featuring Washington was available in the lobby.

When Washington won the 1983 mayoral election, he became the first Black mayor in Chicago's history. He was later re-elected in 1987 and died in November of that year, but activists said his impact lasted far beyond his tenure and life.

Channyn Lynne Parker, who served as co-MC with Kim Hunt, said his influence is not only evident in his specific accomplishments for the LGBTQ+ community, but also in his ability to inspire.

"When we think about the legacy of Harold Washington, it is all around us. It is sitting with us today," she said. "I see it in the faces of individuals, right now, who dare to dream."

Many of the activists in the room Wednesday worked directly with Washington to effect change, with two panels of key players. The first panel, moderated by Mona Noriega, featured Peggy Baker, who Washington appointed to be the city's first paid liaison to the lesbian and gay community, and Ann Christophersen, who served on Chicago's first gay and lesbian advisory committee and is co-founder of Women & Children First bookstore.

Baker said she moved to Chicago right before Washington's first election, but quickly realized how critical it was for him to serve as mayor.

"My 'We're not in Kansas anymore' moment came when I put on a Washington button and I was walking down State Street by Marshall Field's, and this old white guy spit at me," Baker said. "… I came to feel that supporting Washington's work was about the most important thing that you could be doing in Chicago."

Both Baker and Chrisophersen spoke about the way Washington deeply listened to their concerns and made LGBTQ+ rights a priority. Christophersen said he was particularly interested in hearing personal stories.

"It plugged right into his civil-rights agenda," she said. "We were certainly ready for him and so happy to have him, and he was ready for us."

Former Chicagoan Tom Donelan spoke briefly from the audience about Ken Glover, a top Washington staffer who took the title as the first Washington liaison to the gay community (in addition to his other duties), to make sure the community was not left out of the mayor's first administration. Community ally Kit Duffy was formally appointed later, as a volunteer gay and lesbian liaison for Washington.

Co-founder of Windy City Times Tracy Baim, who organized the program, offered insight into Washington's commitment to civil rights, speaking earlier in the night about an interview she did with Washington in 1986.

At the time, he told WCT that he didn't need an election to support gays and their rights, it was just natural.

However, the second panel of activists, moderated by Mary Morten, emphasized that Washington did not do the work for them. Instead, he encouraged them to fight for their rights.

That panel of speakers—Laurie Dittman, Rick Garcia and Art Johnston—helped push the passage of the Chicago Human Rights Ordinance along with the late Jon-Henri Damski.

It would take three tries for it to pass, Johnston said.

When the first version failed, Johnston said they realized Washington could try to sway City Council members—but he wouldn't somehow create a miracle.

"It was a moment of intense education for all of us, when we lost that vote," he said. "And the mayor made clear to us: Don't rely on me to get your rights for you. You must learn to do it for yourselves."

They said that through their work with Washington, they learned important political strategies.

Garcia spoke about the importance of including nuns in their strategy to go after Catholic aldermen, and Dittman said it was important that she was able to do this work as part of her paid political work with IVI-IPO.

Simmons said that as the first openly gay member elected to the Illinois Senate and first senator of color to serve the state's 7th District, Washington's story resonates with him.

"He just had such a marvelous way of connecting with ordinary Chicagoans … but he did it in a way where he built these huge incredible coalitions of people," he said. "He was elected mayor at a time when Chicago was still overtly racist, where people will literally tell you they will not vote for 'the Blacks,' and some of those people lived in the neighborhood I grew up in [Lincoln Square]."

Simmons said that now, as the senator of representing so many different neighborhoods, he's learned to be a coalition-builder, too—and hopes that it will be easier for the generations that come after him.

"We do these things together," he said. "We leave a ripple effect that redefines the political culture, and when I'm done in 10, 20 or 30 years from now, the next generation of people are going to be able to do even more and say more and create more tension."